I hadn’t had the pleasure of hearing a full album from Erica Opizzi before sitting down to review this recording on 15-ips two-track reel-to-reel tape. But since hearing a couple of her sample tracks on an anthology some months back, I was keen to discover more.

When it comes to analogue tape, on the other hand, to say I’m already a fully-fledged convert would be an understatement. I’ve been utterly seduced by all things reel-to-reel for a good few years now. In that time, my listening has shifted from around 90% vinyl and 10% CD to something more like 50% vinyl, 30% tape and 20% assorted digital formats. So, while vinyl will always remain my first love, you could say that the vinyl revival is going in reverse in this house! But then my inner geek has typically been one to buck the trend.

Anyway, back to folk music. My still-beloved vinyl collection is full of it (among many, many other things). The core of my folk collection is of British origin (the Waterson / Carthy dynasty, Fairport Convention and associated spin-offs, etc) and I also have a reasonable stash of North American folk. And then there’s a whole raft of folk-rooted stuff that I wouldn’t personally class as folk, but some do – Bob Dylan, Joni Mitchell, Simon & Garfunkel and the like.

So that’s a brief tour of my folk credentials, now to introduce (or re-introduce, if you’ve read any of my earlier missives) Open Reel Records. They’re a specialist Italian label led by artistic director Marco Taio, whose mission is to make sublime quality recordings of gifted musical artists on analogue tape. I met Marco at last year’s Munich High-End Show and, clocking my enthusiasm for all things tape, he kindly gave me the label’s ‘Demo Reel 2015 Anthology’ to try out. Smart move. Having been suitably impressed by the demo, I found myself saving up the not insignificant sum required to purchase Open Reel’s amazing Thelonious Monk Live in Milan tape – which I gushingly reviewed back in September.

The Monk recording was so good it left me hungry for more, so I took to wondering what might be my next delicacy from Open Reel’s small but superb catalogue. I had (and still have) my eye on a couple of classical albums, but something else was also tugging at my t-shirt sleeve. There’re a couple of excerpts on the Demo Reel from Italian folk singer Erica Opizzi and the second of the two, ‘Shady Grove’, had me at first listen. It’s an Appalacian folk song which owes its roots to a traditional British song, ‘Matty Groves’, which was covered by Fairport Convention on their album ‘Liege & Lief’. The latter is a favorite tune so the chance to hear a version of it in full on master tape proved irresistible. Besides, my collection of analogue and master tapes was so far strangely devoid of folk, so it felt like that needed addressing! (I know, I’m rambling again, but sometimes we have to do this dance of justifying an expense to ourselves. Go figure.) 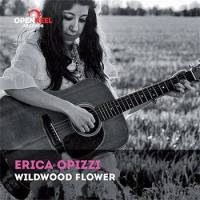 So, down to business. The arrival of a new treat from Open Reel Records always feels like a bit of an event, since the packaging is so stunningly presented that you feel you’ve got your money’s worth before you even open it. Sorry to stereotype, but that’s the Italians for you. They’ve got style, man.

Now to the substance. Erica Opizzi’s ‘Wildwood Flower’ is Open Reel Records’ only folk album, so the skeptic in me took to wondering how well their (admittedly flawless) recording skills would translate from other genres. I needn’t have worried.

Reader, let me tell you that the sound of natural acoustic instruments and a sweet, young, reedy voice palpably hanging in the air of my listening room took my breath away. Yes, I’m gushing again and I make no apology for it. When something merits high praise, it behoves me to bestow it. For me, the natural authenticity and spirit of this recording utterly encapsulates what’s beautiful about folk music.

The slight irony is that the one song I was most looking forward to hearing in full, ‘Shady Grove’, isn’t on the album. But I wasn’t too disappointed since what I did get is a superb collection of contemporary and traditional folk songs – including two numbers written by Opizzi herself – performed with sweet sensitivity and thirsty passion by a collection of highly gifted musicians. Stand-out contributions for me are those of Fabrizio Poggi on harmonica, Stefano Bertolotti on drums, the glorious banjo of Michele Bassanese and, new to me in folk music, one Roberto Nazzari on the Hammond organ.

As I’ve come to expect from Open Reel Records, Artistic Director Marco Taio chose two fabulous venues in which to make the recordings for this album: the Conservatorio di Musica “Guiseppe Nicolini” in Piacenza and the Palazzo Pignano in Cremona, Italy. Taio himself managed both the recording and the production process, as is the case in the majority of the label’s catalogue. I’m beginning to recognise Taio’s trademark style. It beautifully captures the intimacy and soul of the music, the artists, the performances and the venues.

Even if you only slightly like folk, I’d heartily recommend this tape. Here’s where to find it: http://www.openreelrecords.com/opus/erica_opizzi_wildwood_flowers