They don’t call me the ‘rambling reviewer’ for nothing and this, dear reader, will be no exception. But stick with me and you may well be handsomely rewarded, because there is a point to my ramblings and we will, I promise you, get to it.

Over the past couple of years I’ve had the good fortune to try and test a wide variety of reel-to-reel tapes from a range of different companies, so it’s fair to say that I’m starting to get a bit of a feel for the various ‘flavours’ on offer.

Broadly speaking, the business of reel-to-reel tape production tends to fall into one of two camps. The first camp is all about reproducing the original master tapes of classic albums, with The Tape Project, Horch House and Audio Productions all specializing in this field. Without exception, everything I’ve heard from this camp has been the out-and-out best copy of the recording in question. The sound quality is, quite simply, unmatched.

The second camp, meanwhile, which includes companies such as Opus 3, Open Reel Records (the subject of this review) and Analogy Records, mainly focuses on making brand new original high quality recordings direct to tape, generally of lesser-known artists (though, as I’m discovering, no less a joy to listen to). Again, the outputs of this second camp are typically at the pinnacle of sound quality. Run by passionate audiophile producers, their recording processes involve judicious choices of recording technique, venue and microphone placement, prioritising quality and authenticity of recorded performance for the audiophile ear over post-production polishing for mass consumption.

“Do recordings from more well-known contemporary artists exist on tape?”

But what if you want to hear superlative quality recordings from more well-known contemporary artists and musicians? Do such things exist on tape?

Allow me to introduce the subject of this review, which answers a resounding ‘yes’ to that very question.

Confession time: before acquiring this recording, I’d never heard of Eduard Kunz and assumed that the tape was just another example of a high-quality recording of a lesser-known artist. But within just a few seconds of Googling, I realised my mistake… turns out Mr Kunz is an internationally celebrated, world-class pianist.

Eduard Kunz was born in 1980 in the Siberian city of Omsk. His talent was spotted early and so he studied at Moscow’s Gnessin Special School of Music before moving on to the Tchaikovsky Conservatory. From there he relocated to the UK (Cambridge) where he was quickly recognized by British music aficionados. He has performed with almost every major orchestra in the UK including the BBC Symphony, BBC Concert, City of Birmingham Symphony, Royal Scottish National and Philharmonic Orchestras to name just a few. Across Europe it’s the same story – from Stockholm to Berlin, Paris, Amsterdam, Barcelona, etc. On the world stage, Kunz is the winner of multiple first prizes of international piano competitions from Bucharest’s George Enescu International Grand Prix to the New Orleans International Piano Competition. BBC Music magazine recently named him as one of the ten most inspiring up-and-coming pianists in the world. So how come I’d never come across him?

Well, it seems that our Mr Kunz is something of an enigma. Now in his mid-thirties, despite his global reach and reputation there are very few recordings of his work. Which is precisely what makes this such a stand-out tape.

Kunz’s relative lack of recorded repertoire is his own personal choice – one that goes hand-in-hand with his decision to step back from many of the international competitions in recent years. Why? “Inspiration, imagination, creativity,” he says. Competitions are typically judged on ‘quantifiable’ criteria and these no longer interest Kunz as much as in-the-moment passion and presence.

“There are things that cannot be rehearsed and happen only on the stage,” he says. “On the stage there isn’t only you and the piano, it’s also the public, and they’re as important as you and the piano. That’s why I’m so against studio recordings. When I play, I can hear a thousand people breathing and they can’t lie to me. People ask where are the audiences better. There is no such thing. Every musician who has been in one city, two times in a row, experiences a different city every time.”

So, Kunz’s playing is fired by the moment, and by the unique exchange with each audience. I’m liking the man already, even before I play this tape….

From casual encounter to daunting task

So how did Open Reel Records’ Marco Taio manage to persuade the man who doesn’t like recording to record?

“It all began with a casual encounter.” explains Taio. Taio met Kunz while attending one of the latter’s performances on the shores of Italy’s Lake Garda. In conversation, it soon emerged that the two men shared much in common as regards their views on music and its recording and so, a few more conversations later, Kunz agreed that Taio could record him playing – but only live, with an audience.

I can’t say I’m entirely surprised that Taio proved to be the man for the job. His recordings have something of a signature, and it’s one that I’m increasingly seduced by. Eschewing the studio, he records his artists’ performances using simple, natural microphone arrangements in very carefully selected venues. And what venues! Taio is blessed with some outstanding options on his doorstep, near Milan, Italy. I’ve heard recordings he has made in the Bascilica San Pedro in Ciel d’Oro and the Conservatorio ‘Go Nicolini’ in Piacenza, among others. Each venue is an extravagant, inspired choice. Taio clearly knows what he wants from a recording and seems to have the knack of getting it, and getting it right.

For this particular recording, Taio placed Kunz in the Antico Teatro do Campione del Garda, Bresica. One look at this sumptuous venue says a great deal. The air of the venue is perfectly captured by Taio, using his preferred set up of Schoeps microphones, feeding a Millennia Media HV-3D microphone preamplifier, a Studer 169/10/02 mixer and then straight into the Nagra T and Nagra IVs tape recorders loaded with SM900 tape. In this case, however, Taio had to work that little bit harder still….

“Kunz does not like anything about recording studios,” Taio explains, “so to gain his confidence and make a recording with a sound quality that he liked was a really daunting task for me. At the beginning of the recording process I tried to work in my usual way. Impossible! It soon became clear that things like planning an edit or repeating small sections in order to ‘clean up’ a few notes just weren’t going to be an option… He said to me, ‘I cannot repeat an internal passage of the sonata (Beethoven’s Waldstein Sonata) because I build the musical discourse as a whole, along different paths each time… so if there’s something you don’t like, then I’ll repeat for you the whole sonata!’ I realised at that point that I was working with a kind of artist that is disappearing…. a genuine genius. So I recorded all of his rehearsals purely to perfect my placement of the microphones. For the actual final recording, it’s 100% in-the-moment live performance.”

And what a recording. It is, quite simply, sublime. While Taio may have been put through his paces by Kunz, that Taio ‘signature’ sound quality that I enjoy so much remains clear and immediately apparent. Bright, lively, full of air and space: a beautifully captured, utterly analogue, musical experience.

Beethoven’s Piano Sonata in C Major No.21 Op.53 ‘Waldstein’ is a popular classic, of which I already have two versions on vinyl: Barenboim on HMV and Kempf on DG. While I fully expected to be blown away by a master tape recording, what I hadn’t anticipated was to be so utterly staggered by Eduard Kunz. It perhaps took me until my second listen to realise that something really very exciting indeed was happening here. 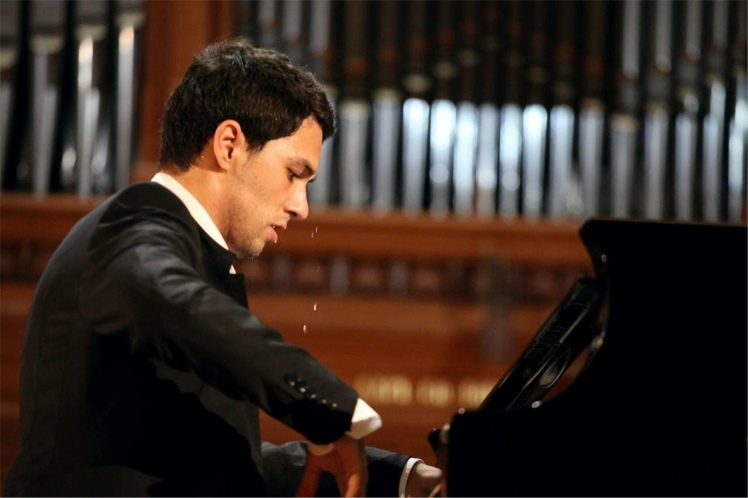 Kunz plays with total commitment, passion, and individuality. He is refreshing, exhilarating and staggeringly beautiful.

Compared to both Barenboim and Kempf, his playing is viscerally ‘alive’. From the opening of the piece, the power and dynamic range are immediately apparent. The piano’s percussive nature draws you in and holds your attention.

“Timing and discipline and onions”

The first thing that struck me about Kunz’s performance is something so profound, yet nothing to do with the ‘sound’ as such: it is the space that Kunz leaves between phrases.

There are a few times when Kunz pauses for a second or so, maybe less, but it is so absolutely correct, that pause – yet seems completely overlooked by other pianists. The next aspect that grabbed me, which is entwined with the spacing, was the sense of pace. Both Kempf and Barenboim seem at times to be almost falling over themselves, their fingers tripping as they race to play the right keys at the right time. In comparison to Kunz, they both sound fast in a rushed way. Played by Kunz, these same sections sound light, joyous and beautifully melodic. Kunz’s fingers dance, it’s as simple as that. He has such mastery, such an intrinsic ability that instead of struggling to keep up, feeling rushed or ill at ease, he realises the masterstroke of the work: he finds the joy, the love, the light, and he brings the audience into this dance.

With a little more Googling, I discover why. Kunz’s outstanding level of craft is underpinned by hours and hours of daily practice over many years. In some cases, this approach can yield a mechanical technician but Kunz does it for (for my money) the best of reasons: to achieve complete mastery of the instrument such that he can then play with absolute creative and expressive freedom. In his own words: “If you’re not free with your means, your language, you can’t express yourself properly. Emotion is important at the end, but you need to get here, you need to be able to formulate it out loud, to make the performance as expressive as you want. There is so much work that first takes place in your head rather than your heart. It’s like going to a restaurant with an amazing chef. He gives you the dish and it’s magic and you don’t see the process behind. But it’s just timing and discipline and onions and whatever.”

So, despite that fact that I’ve now discovered the ‘holy grail’ of a world-class contemporary musician recorded on master tape, my problem now is that I’m completely hooked on the work of a pianist who rarely chooses to record at all! But there is hope: Open Reel Records have booked Kunz for another recording. That tape, dear readers, will be mine. In the meantime, it’s back to Google for me in search of Kunz’s performance schedule. Right now, I have the option of travelling to Moscow, China or Japan. And I thought my vinyl and tape addictions were expensive!