Canada-based UltraAnalogue Recordings has just released 3 new open reel tapes, all recorded at a live concert held in May 2018 featuring star cellist Narek Hakhnazaryan with pianist Benjamin Smith. Priced at $275 each, the three are:

I got my hands on a copy of the Shostakovich / Elgar tape and, having recently discovered a thing or two about UltraAnalogue Recordings, was excited to hear the results of the company’s painstaking recording process (which you can read about in part 1 of this ‘ramble’ if you haven’t already).

I invariably find myself being curious about the human stories behind any great piece of music and the Shostakovich piece is an interesting one in that respect. The Sonata for Cello and Piano in D minor, Op. 40 (to give the piece it’s full name) was composed in 1934 just before the censure of Shostakovich’s music by Soviet authorities. This time period also coincided with a tricky episode in the composer’s personal life. He divorced his wife, Nina, after falling in love with a young student but then within a year, remarried Nina and the following year they had a daughter. The cello sonata was apparently written in just two weeks, during his separation from his wife.

I’m told that Shostakovich’s Sonata is considered by cellists to be one of the key works of 20th century cello music. I, sadly, am no musician so can only approach it as a listener. For me personally, it’s a highly emotionally charged composition. A bit of research suggests that Shostakovich had begun to feel a need to seek a greater clarity and simplicity in his music, in contrast to his more avant-garde work in the late 1920s and early 1930s. So this piece was regarded as quite a contrast to earlier grand, romantic, theatrically-driven works, with a move towards chamber music’s lighter and more melodic character. That said, I’d have to disagree with anyone who suggested there was an absence of theatricality here! I personally found plenty in common with Shostakovich’s earlier larger-scale symphonies, in that there’s still a good helping of cynicism, anguish, scorn and wit. (My girlfriend tells me that one of her favourite poets, Daniil Kharms, was also active in the early Soviet era and had a similar talent for expressing despair and derision with such wit that the overall effect could at times seem deceptively light and comedic.)

To my ear, the upshot is that the emotional charge of the piece feels refreshingly unsentimental. Instead, it seems to better reflect the true nature of human emotion with its intense yet fleeting peaks, troughs, twists, turns and contradictions. Underlying this fiery dance is the steadier inner self, less ruffled by the ways of the world and constantly returning to its underlying foundation of peace, calm and quiet reflection.

The piece comprises four movements, three of which are fast-moving while one, the third, is more slow and expressive.

From the opening bars of the first movement (Allegro non troppo – ‘fast but not too fast’), the cello sounds deep, mournful and achingly beautiful. Its timbre is so resonant that you can not only hear the strings, but also feel and sense their fibre, their natural gut. It’s immediately obvious that this is one ultra high quality instrument being played and one masterful musician playing it. Soundstage-wise the cello seems to sit slightly in front and to the right of the piano. The dynamic contrast between loud and soft passages is immense. I compare my felt experience with the measurements: the quieter parts play perfectly clearly at -30dB while the peaks and crescendos easily hit +5dB.

About halfway into the first movement the tempo slows and the cello strings are plucked. At this point the image of the cello becomes almost holographic, sitting right there perhaps eight feet in front of me.

As the movement progresses through its intense climaxes and softening abatements, the relationship between piano and cello feels like a call and response type of dance, but then at around 7 minutes in, the piano tempo slows right down and the cello once again feels gorgeously tender. At this point, the music moves the piano and cello towards becoming more homogenous, playing together in intuitive harmony such that the overall tone becomes more ‘one’. As the first movement draws to a close, that tone feels haunting (or haunted?) and somehow seems to be throwing out a question or at least something unresolved. The occasional shuffle of feet or page-turn of the score serve as a reminder that this is a live recording, which somehow further emphasises that real sense of the musicians playing in intuitive sync with one another, feeding off the audience at the same time, and almost gives the impression that, rather than following a score, they’re moving together towards an unknown or uncertain future. It’s captivating!

The shorter second movement (Allegro) opens with repetitive cello sawing, over which the piano plays an increasingly thrusting, almost obstinate melody. To me the music is suggesting frustration, the sense of feeling hemmed in, or torn between opposing poles, or both. And yet at the same time there’s a confidence, a percussive building of energy. Despite the fact that the music is giving me a sense of being pulled in divergent directions, the musicians are still very clearly working as one in their deft communication of that sense. This may be chamber music but boy, am I still getting a welcome whiff of Shostakovich’s trademark sarcasm and wit.

In the third, slower, movement (Largo), we put the wit to one side and get quietly serious. It’s an incredibly soulful piece and therefore not a ‘comfortable’ listen – which I mean as a compliment, as we’re taken on an emotional journey that swings between bleak despair and rhapsodic hope. The discomfort is that of genuine, unflinching introspection, where we look open-eyed at the way things are and the way we are, and feel the full force of both the beauty and the pain and struggle that we find there. Eventually, this all fades into silence. That silence could feel heavy to some, but to me it feels pure, calm and peaceful. Either way, there’s a timeless quality to it.

The finale is brief (another Allegro of around four minutes) but packs some punch. I can’t quite decide whether its playful ebullience is a joyous release or a biting brush-off. Certainly it’s full of zest but the abrupt ending is what really points me towards a darker intent – like being built up then unceremoniously dropped off a cliff or abandoned. It puts me in mind of the heady energy of tango or flamenco, but with its roots firmly in Russian folk music rather than Spanish. Brilliant!

The second piece is a short one, Elgar’s Salut d’Amour  Op. 12, at around three minutes. There’s a romantic back story to this one too, as you might guess from the title (‘Love’s Greeting’). Elgar gave his intended, Caroline Alice Roberts, Salut d’Amour as an engagement present. So it’s altogether a calmer, more traditionally romantic piece. It’s one of his best known works and often described as a ‘salon tidbit’. It’s sweet, bright and breezy with a pastoral feel and gives an interesting contrast to the Shostakovich in terms of hearing the piano and cello in quite different ‘modes’ – jolly, melodic and flowing.

If you want to test the dynamics of a tape deck you’re considering buying, or to show off those of one you’re selling, this is an excellent recording to do just that. Shostakovich’s composition, the quality of the musicians and the first-class recording all combine to create a breathtakingly dynamic ride and a half!

The recording is a live performance in front of an audience, however it takes place in a studio setting rather than a traditional concert setting such as a church, theatre or auditorium [for more on the recording process check out part 1 of this ramble/review]. So the venue itself has little acoustic signature. Because of this, the physical space is less defined and instead serves as more of a place-holder for the instruments. On the one hand, I have a real soft spot for the acoustics of a grand old building, particularly a church. But then on the other, the resulting effect here is that the musicians are right here in my living room playing just for me. If I close my eyes and reach out an arm, I’m convinced I could touch them. In fact, as the music comes to a close I’m almost about to open my mouth to congratulate them on their performance!

Going back to Ed Pong’s stated goal (also in part 1) of “making the most transparent recordings I can of some of the best young musicians today playing some of the world’s highest quality instruments,” I have to take my hat off to him. He succeeds – in spades.

My hat-doffing of course equally extends to the excellent musicians. Here’s a bit of background. 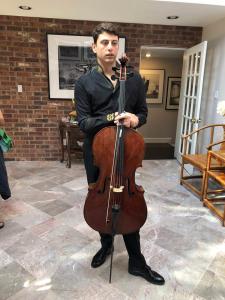 Cellist Narek Hakhnazaryan was born in 1988 and raised by his musician parents in Yerevan, Armenia where he began studying cello at the age of six. At age 11, he and his mother moved to Moscow where he joined the Moscow Conservatory in 2006. Narek is represented internationally by Intermusica. From their website:

“Since winning the Cello First Prize and Gold Medal at the XIV International Tchaikovsky Competition in 2011 at the age of 22, Narek Hakhnazaryan has performed with most major orchestras and in recital across the globe and has established himself internationally as one of the finest cellists of his generation. From 2014-2016 he joined the prestigious BBC New Generation Artists scheme during which time he made a hugely successful BBC Proms debut, with the Guardian commenting on his “technically impeccable and distinctively personal account” of Haydn’s First Concerto. Of his LAPO debut in 2012, the LA Times said “His command of the instrument is extraordinary”, The Strad has described him as “dazzlingly brilliant” and the San Francisco Chronicle “nothing short of magnificent.””

Described as a “thoughtful and immensely exciting performer” with “scintillating technique”, Canadian pianist Benjamin Smith has performed as soloist and chamber musician across Canada and the United States. A laureate of numerous competitions including the 2013 Virginia Waring International Piano Competition, he currently resides in Toronto, working as a lecturer and coach for the Glenn Gould School (GGS) and the Taylor Young Artist Academy of the Royal Conservatory.  He has performed as soloist in Carnegie and Alice Tully halls, and has partnered in recital with principal players of the Met, Boston, Los Angeles, Houston, Seattle, Pittsburgh, Montreal, Toronto, and Aarhus symphony orchestras.  Dr Smith holds a doctorate from Stony Brook University, along with degrees from Juilliard, GGS, and the University of Toronto.