The Munich High-End Show always seems to go from strength to strength and for me 2019 was the best year yet – not least because of a number of enticing developments in the niche-but-growing world of audiophile tape. I had a brilliant few days catching up with a range of tape movers and shakers. Here’s a round-up of some of the highlights.

The new TM 1600 deck: from Thorens, Ballfinger & Recording the Masters

The biggest R2R scoop of the show was, of course, the forthcoming new TM 1600 deck. Renowned Swiss analogue hi-fi brand Thorens, known for its excellent turntables, recently announced that it’s working with Ballfinger to launch a brand new reel-to-reel player designed for home use. Last week I promised you I‘d check out the prototype of the new machine, which was being previewed at Munich. And here it is…

Well, the machine looks very cool indeed. It’s compact, slim and sleek and can be wall-hung as well as laid flat. As previously mentioned it’s a two-track, quarter-inch, playback-only design with three motors. It handles reels up to 10.5” with speeds of 7.5 or 15 ips, and equalization is switchable between CCIR and NAB.

The TM 1600 is due for launch in summer 2020 with a limited production of 100 units, which will be priced at €12,000. I haven’t heard it yet, as this was a just preview rather than a demonstration. But I did catch up with the key people involved in its creation. I chatted with Thorens’ owner and CEO Gunter Kürten about the resurgence of tape and also analogue as a whole, and checked out the brand’s extensive range of turntables. They were also previewing a very nice, old-style, TD-124 turntable but with a new direct drive motor and a great-looking arm based on (and resembling) the old EMT tonearms.

And of course I caught up with Ballfinger’s designer Roland Schneider who, as always, was admirably humble and unassuming given his incredible design credentials and the fact that he seems to have found himself slap-bang at the centre of the reel-to-reel revival! I’m delighted to report that Roland has kindly agreed to an exclusive interview with the rambler, so you can look forward to that in the near future. So if you have any Ballfinger-related questions burning a hole in your brain why not drop me a line and perhaps I can put them to the man himself? In the meantime, I was heartened to learn that Ballfinger has been so busy fulfilling R2R orders that they’ve had little time to work on anything else of late! Roland has already sold more than 20 of his M-063 tape machines and has orders that will keep him busy through 2020. Given that they only launched a year ago, that’s really quite something!

I discovered that leading R2R tape manufacturer Recording the Masters is also involved in the Thorens / Ballfinger project. I met with head honcho Jean-Luc Renou (chair and CEO of the Mulann Group) and sales manager Théo Gardin, both wonderfully warm and friendly chaps, as well as obviously being fonts of tape knowledge. I’m planning to visit Recording the Masters in France in a couple of months’ time and look forward to reporting on that visit here. 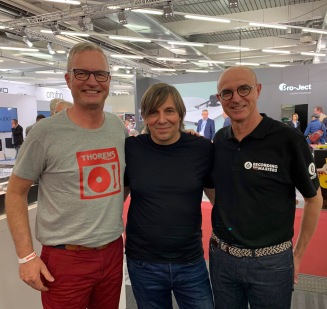 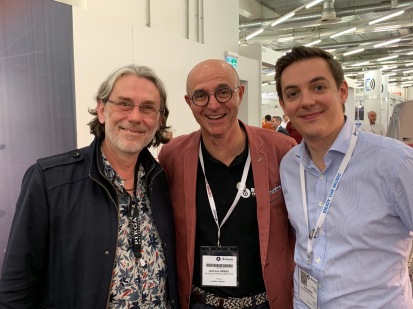 I ran into Greg Beron of United Home Audio (UHA), which was a stroke of luck since one of the next jobs on my list is to write a new section for the reel-to-reel rambler about ‘hybrid’ tape decks and United Home Audio’s are reputed to be among the best-sounding machines available! So what’s a ‘hybrid’ deck? Well, they’re also known as ‘remanufactured’ or ‘new from old’ machines and essentially they involve taking an old vintage deck as the starting point for building a new one. How much of the resulting deck is ‘old’ and how much ‘new’ differs from maker to maker. In UHA’s case, Beron begins with a vintage Tascam chassis. The degree of modification varies from model to model, but by way of a brief taster for now: the top models include all-new outboard power supplies, new tape heads made especially for UHA, completely new audio electronics and of course a rather striking new finish. Watch this space for more on hybrid decks shortly.

King of the Train: a cool preview from STS Analog

It was great to catch up with Fritz and Netty de With of Netherlands-based STS Analog – an audiophile label which is part of STS Digital, but then the pair wisely introduced a separate sub-brand name for their excellent analogue recordings too. STS had several new tapes to reveal, including a ‘show special’ that was on offer for the bargain price of €100, but of most interest to me was a 7.5ips preview copy of a really cool jazz / soul tape, King of the Train, by the late Rosa King. The album remained unreleased in King’s lifetime, but then the master tape of the recording was given to STS by one of the label’s best-selling artists, Ingram Washington. American-born, Rosa King lived much of her later life in Holland where she befriended Washington and presumably gave him the tape. Fast-forward to the present, when Washington brings the badly-aged master to STS to see if it can be saved. Due to the poor state of the original master, on this occasion Fritz needed to undertake a digital sound restoration in order to bring it up to its current level of quality. Now, you may have heard me being a bit sniffy about digital interventions in the past, but the tape sounds amazing so I’ll shut up and admit that I was delighted to learn that Washington is now tracking down King’s family to request a license to go into production on this title. And, by way of an interesting post-script, the preview sample I heard was copied from the newly-restored master using STS’s Ballfinger M-063 for playback feeding a bank of six Phillips N4522 recorders (so now we know who one of the first 20 Ballfingers was sold to!).

Italian audiophile tape label Hemiolia Records also had a stand at the Show and so I took the opportunity to meet their main man, Claudio Valeri, recording engineer Pietro Benini and Paulina Vogt who handles sales and marketing (and who also happens to be a very talented jewellery maker and sculptor). We had a great conversation about analogue purism. Hemiolia’s recordings are all analogue with a capital ‘ALL’. They’re very clear about that and even have an ‘A4P’ analogue certificate that they issue with all products and hand-sign to confirm their total adherence to analogue processes in all phases of production. You can read more about that on their website here.

‘Hot off the press’ here was something very special indeed: the world premiere of the second in a series of previously unreleased live Pavarotti concert recordings on master tape. Needless to say I just had to have one, which I now do. It sounds absolutely amazing and there’s a really interesting story behind the whole project too. I’ll tell it to you – look out for a review and feature here in the coming months.

A quick catch-up with Zavalinka Records

Zavalinka’s father-and-daughter team, Nikolai Kazantsev and Maria Kazantseva had a stand at the show so I popped over to see them again (having previously met at the 2018 Show). They had a couple of nice decks on the stand, a Denon and a Nagra, and were playing a selection of Zavalinka’s own recordings (which were either recorded or produced by Nikolai). Two favorites immediately stood out for me: ‘Bryatz – The New Age of Balalaika’ and an Astor Piazolla violin and piano recording (I’ve previously enjoyed some excellent recordings of Piazolla’s compositions from Open Reel Records). 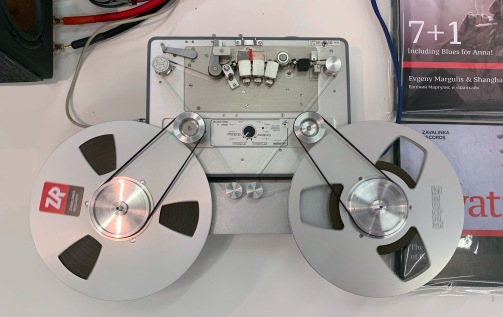 I also caught up with audiophile jazz artist Lyn Stanley who had flown in from the USA for the Show. Lyn was doing a presentation and demo of her new direct-to-disc’ vinyl album, London with a Twist – Live at Bernie’s, adding live vocal harmonies as she played the recording. The album is the second part of a two-part Julie London tribute, and follows up the well-received 2018 album London Calling – A Toast to Julie London. (The ‘Bernie’s’ in question is the iconic Hollywood-based Bernie Grundman Studios, no less!).

The maestros: de Paravacini, Kessler and a very rare find

And, last but no means least, it was, as ever, great to catch up with the tape guru that is Tim de Paravacini, and fellow addict and co-rambler Ken Kessler. Conversations with both Tim and Ken are always as enlightening as they are entertaining. What’s more, Tim had some treats to show me: a selection of superb quality, and extremely rare 1970s Japanese master tape copies – mostly of classical music and all beautifully produced. I had no idea that master tape copies were even being issued back in the 1970s, but in fact it seems there were several audiophile labels in Japan doing just that. There’s talk of Ken penning a review which, again, will be one to look forward to.

All in all, it was absolutely amazing to see so much representation from the world of analogue tape at High End 2019, which I took as clear evidence that the comeback is surely going from strength to strength.

I’m really looking forward to further chats with Ballfinger’s Roland Schneider and to visiting Recording the Masters in France, and to sharing what I discover here.

On that note, if you happen to be in the UK this coming October (26th & 27th) then pencil the Hi-Fi Show Live in your diary. I can’t say too much right now as we’re still in the ideas/planning stage, but if the plan comes together there’ll be some exciting R2R-related happenings at Ascot this year. Keep watching this space!