“In the world of high-end audio, there is nothing as intricately or as spellbindingly crafted as a reel-to-reel tape deck,” says US audio magazine The Absolute Sound (TAS) in a recent blog. I couldn’t agree more.

And, “when fed a spool of pre-recorded tape [it] comes closer to recreating “the absolute sound” than any other playback medium extant. Indeed, if the words “absolute sound” are something more than a catch phrase, if they mean what they say, then highest-fidelity playback of 15/30ips, two-channel, reel-to-reel master tapes is what they mean.” Yep, tick (check) again.

But here’s something I hadn’t necessarily thought about, or at least not consciously, and it’s a really great point: “Part of the reason that mechanical objects like tape decks are so endlessly intriguing is that you have to lay hands on them to make them work… there is something important to be said for committing yourself to all this labor. As anyone seriously interested in cameras or cars can tell you, being compelled to lay hands on an object to make it work breeds a connection that goes a lot deeper (and is a lot more intensely satisfying) than merely pressing a button on a DAC or a virtual button on a computer tablet. It not only gives you a sense of proprietorship, but of active participation.” Nicely said, it really does!

And, if you’re in the market for a deck, the blog gives a great review of one of the new machines on the market, the Metaxas Tourbillon T-RX.

Spoiler alert: “It is (alongside the UHA SuperDeck) the most realistic-sounding, highest-fidelity source component I’ve ever heard, as well as one of the coolest-looking pieces of stereo gear I’ve ever seen. It will surely be my nominee for TAS’s Overall Product of the Year Award in 2022.” Wow – I’ve yet to hear one myself and now I’m feeling seriously envious!

“You simply don’t come across something that is this sonically flawless, functionally innovative and ingenious, and aesthetically breathtaking every day. In fact, I haven’t come across anything like it in nearly 60 years of looking. That should tell you something.” I’m listening…!

Check out the full article – and also find out why Metaxas added ‘Tourbillion’ to the name of the TR-X (which I’d been wondering about) – at www.theabsolutesound.com/articles/kostas-metaxas-t-rx-tape-deck 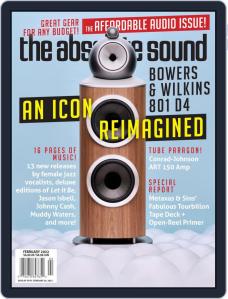 There’s also a review in the February 2022 print edition of the magazine, in which the reviewer is named as Jonathan Valin.

Find out more about the deck at www.metaxas.com

Also, the UHA SuperDeck is reviewed by TAS here: www.theabsolutesound.com/articles/united-home-audio-superdeck