We were delighted to have Marco Taio, artistic director of Italian label Open Reel Records, join us in The Reel-to-Reel Rambler room at Hi-Fi Show Live last month – for several reasons. He’s a brilliant sound engineer, a gifted professional musician, a fascinating speaker, has many stunning tapes to share, and is also a very warm, fun and friendly chap to hang out with!

Marco treated visitors to the show to a demonstration of several of his tapes along with a presentation on some of the key aspects of how he approaches his recordings. Some of that presentation is included in his guest blog piece below, and we also caught up with him for a quick chat on video. Over to Marco…

The history of Open Reel Records really starts with my own musical and artistic education. I’m first and foremost a musician. I began studying guitar and piano at the age of 8 and my future, with just a few minor diversions along the way, was already set from there. I held my first solo guitar concert at age 13 at the Filodrammatic theatre in Piacenza, performing a programme that included works by S.L. Wiess (a contemporary of the German baroque composer J.S. Bach), Fernando Sor, Sonata III by M.M Ponce and the complete performance of the 5 preludes of H. Villa-Lobos.

In the same year, 1974 (so if you really want to, you can work out my age!), I had my first opportunity to visit one of RAI’s recording studios (the Italian national television and radio broadcasting company). It was love at first sight. The magic of being able to listen to my newly recorded musical performances, and at such a level of sound quality, impressed me enormously – to such an extent that it wasn’t long before I purchased my first Revox A-77 recorder. This was my first recording system and in a very real sense it became my second music teacher and classmate.

A side effect of making my own recordings was the birth of my passion for discography and the start of a daily listening habit that led me over the years to listen to, and study, almost all of the most important records from the 1920s to the present time. In the meantime, my concert activity as a guitarist continued for many years and allowed me to play in many countries around the world, in prestigious halls both as a soloist and with an orchestra, and also to perform famous concerts such as the Concierto de Aranjuez by Joaquin Rodrigo I, concertos by Mauro Giuliani, by H. Villa Lobos etc.

After that first experience of radio production at RAI, there were many others and each time, my curiosity about the recording technique used by sound engineers was intense. This curiosity, which later turned into competence, earned me the friendship and esteem of several sound engineers and producers who later became my mentors in the second phase of my musical life. These mentors included Pierre Dumont (RTSI), the engineer Thomas Gallia (Founder of the Angelicum label, and producer of RCA Victor Red Seal, Astrée, Harmonia Mundi, Deutsche Harmonia Mundi, EMI Electrola, BMG Classics, etc.) and Alberto Albertini (Fono Roma) to name just a few. Thanks to them, I started a period of learning and apprenticeship by acting as a musical assistant during their productions (when I was free from concert tours).

By now it was the 1980s and 90s and, despite the advent of digital technology, both Pierre Dumont and Thomas Gallia continued to record in the analogue domain using Studer and Telefunken recorders equipped with Telcom C4 or Dolby.

At the beginning of the 1990s I started producing my first record productions for the burgeoning CD industry (in those years), using early DAT Tascam and Sony recorders. Although the analogue machines were slowly disappearing, I bought some of Thomas Gallia’s old analogue equipment: Studer and Nagra mixers and analogue recorders. After Thomas passed away in 1997, I expanded the range of services I offered, not only to the recording industry, but also in making recordings of important Italian concert seasons for the archives. This was a great opportunity for me to experiment with equipment and techniques in hundreds of concerts: types of microphones, amplifiers, mixers, analogue recorders, D / A converters and various microphone placements. In these concerts I was able to record widely different instrumental ensembles: from the soloist to the great orchestra, and opera. This period allowed me to develop the audio recording techniques that I still use today in Open Reel Records.

A simple but important premise for orchestration is this: classical music is already ‘mixed’ by the composer and so it doesn’t need too many mics!

After making many recordings and listening to many ‘historical’ recordings such as RCA’s Living Stereo (with Fritz Reiner) and Mercury recordings, I came to the conclusion that a simple system with few microphones – and above all without spot microphones near the instruments – is the best approach, except in exceptional cases and when justified by the score.

Classical composers use a fundamental discipline called orchestration. To describe it in a few words: it is the study of the distribution of the parts of a composition allocated to the various instruments. The extremely important thing is the choice of instruments to which the various musical lines are assigned, since in an orchestral group, we can have a great variety of instruments – strings, wind (which in turn are divided into woodwind and brass), percussion, etc. Composers of classical music have always orchestrated their works without resorting to arrangers, a practice widespread in other musical genres. These orchestrations give rise to works with a colour and a mix conceived by the composer himself. This is the reason why if you use many spot-mics near quieter instruments in order to lift the volume, you go against the sonorous balance of the score conceived by the composer. What’s more, in addition to the problem of not being able to achieve a correct mix anymore, these multi-microphone recordings with many spots do not reproduce the correct spatial depth that really exists between the sections of the strings and the wind instruments. In a recording, it should be perceivable as a different delay on the pick-up of the main microphones between these two components of an orchestra: the strings must feel in the foreground and the winds in the background, to the rear of the strings. For these reason, my favourite microphone configurations are: the Decca Tree with outriggers, or a simplified variant of this with ‘central ORTF’ with panoramic outriggers on the sides. I occasionally use 2/4 mics positioned high up above the winds and brasses, but never close to the instruments. This is sometimes necessary if the hall acoustics are not optimal. This means that it is possible to record an orchestra with 8/10 mics or even less if the acoustics allow it! So I hope that explains why I use minimal microphone set-ups where possible, in order not to alter the colour and sound balance desired by the composer.

After an initial period of only recording digitally, in around 2004 I took up a few opportunities to make both analogue and digital recordings in parallel, using the ability of a Studer 169 to connect multiple recorders together. A part of the Open Reel Records catalogue comes from this period.

The qualitative results were astounding and many artists were so impressed with the quality of those tapes that they gave me the rare opportunity to publish their live performances. In an age of massive digital editing, this was not a trivial matter.

I would like to emphasize the fundamental role of the venues in which I generally record my artists. I choose them personally with extreme care, the same degree of care that I place in the choice of my musical instruments. The room, after the artist and their instrument, is the second most important tool in the audio chain. Anything that we lose due to an acoustically uninteresting hall, we will never be able to restore later.

In my view, what you need for a high quality recording, in order of importance, is:

I put the equipment in last place in this ranking because, after many experiments, once you have adequate equipment it’s not going to be a valve or a transistor amplifier that changes your life during the production of the recording. More important is the musical sensitivity of the producer / sound engineer and his ability to lead great artists to unforgettable results.

But that’s not to say that the equipment isn’t important. I’ve favoured many different microphones over the years, including DPA (4006/4003/4011) and Neumann (KM 130/132/140 / 86i U-67, U87, U-89, TLM 170), and mixers from various manufacturers such as Soundcraft Delta DLX, Soundcraft LM1, SAM 82 Radio Broadcast Mixer, Studer 961/962. Also many microphone amplifiers such as Lakepeople, Millennia Media, Prism Sound, AMS Neve, Weiss etc. I haven’t necessarily chosen the absolute best, but what was absolutely preferable for my particular way of working. For example, I almost never use large-diaphragm microphones, even though I’ve kept a few.

Folks at Marco’s live presentation were treated to a number of recordings made by Marco for Open Reel Records, along with a brief explanation of which mics were used. or what the choice of venue was and why.

This recording is perhaps one of the most daring experiments produced by Open Reel Records. In fact, contrary to what is normally done in this kind of production, we recorded pop-folk music using the natural acoustics as we do for classical music productions, without using any digital reverberation. The simplest tracks on this album, containing songs for solo voice and guitar, were recorded in an ancient romanesque pieve with only two Schoeps mk21 microphones. The results of this experiment satisfied me so much that together with the singer Erica Opizzi, we decided to publish an album in our Master Series. Album available at http://www.openreelrecords.com/opus/erica_opizzi_wildwood_flowers 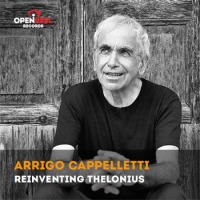 This recording by Arrigo Cappelletti came about almost by accident. While I was planning and organizing a recording of pianist Eduard Kunz (Beethoven Sonata), we learned that the piano would be brought into the venue a day early. So with my proverbial insistence and obstinacy, I convinced a hesitant Arrigo Cappelletti to record a tribute to the music most dear to us in the jazz field: that of Thelonious Monk. The result was Reinventing Thelonious, an album recorded without repetition, improvising on a few notes taken from the music of Thelonious and the music of Arrigo. I recorded two 1,100m open reels for a total of one hour and thirty minutes of music, from which we set out to extract only the pieces that were really strong.

Arrigo played all of the pieces without interruptions – the only break was the one necessary to change the master tape. The result is a wonderful performance that has found its place in our Master Series. This project demonstrates once again that the role of a sound engineer and producer is not limited to audio recording alone, but that friendship and relationships built on trust with artists are fundamental to achieving high goals. Album available at http://www.openreelrecords.com/opus/arrigo_cappelletti_reinventing_thelonious_monk

View a quick chat with Marco…