For some reason it seems that us audiophiles don’t tend to talk much about room acoustics. Which is odd when you think about it, since no professional recording studio or live music venue would be heard dead without a whole heap of serious acoustic considerations in place. In fact, when you really think about it, it’s verging on downright madness that we’re quite so silent on the subject, since we’re constantly obsessing about the control, damping and isolation of pretty much everything else from connector cables and the component parts of a cartridge, to the feet of our speaker stands. And so, in our obsession for every tiniest detail, we omit to notice the effect of what’s arguably the biggest component, the largest instrument here present – the listening room itself!

And yes, before you ask, I count myself among the guilty. And no, I didn’t have some miraculous out-of-the-blue epiphany. What happened is what usually happens, in music and in life: I found myself with a problem, had to work my way around it, and in so doing realised something I’d hitherto failed to realise.

Cast your mind back to October 2019 (the days when, if someone said ‘corona’, your first thought was a cold beer). My thoughts, meanwhile, were being consumed by the forthcoming Hi-Fi Show Live. The UK’s premier annual audio show was changing venue this year – moving to the UK’s iconic Ascot racecourse grandstand. And, as well as doing my usual job of supporting my David Denyer PR clients, I was going to be exhibiting in my own right, with the very first ‘live’ outing of my Reel-to-Reel Rambler webzine. Cards on the table, I was taking a massive chance… I’d invested a wad of my own cash in hiring a very nice, double-sized room. I’d negotiated the loan of some of the world’s finest tape decks – vintage and new, then I’d negotiated the loan of some of the world’s finest hi-fi to build a demo system that would do justice to the incredible sound of tape. I’d also invited a bunch of R2R tape aficionados to travel from Europe, the USA and Canada to give talks and answer visitors’ questions – and they’d said yes. But frankly I had no idea whether anyone else but us would be even vaguely interested. I mean, this is analogue tape. It’s in revival for sure, but still, it’s niche, man!

So yeah, the heat was on. And, if that wasn’t enough pressure, there was another quandary I had to solve. Some time before the show I’d driven to the venue to review my allocated room and to start planning my whole set-up. I walked into the room: wow! First thing I noticed: the panoramic view over the famous Ascot racecourse. This very room would be where the uber rich and famous would normally come to watch the race. I felt a tingle go up my spine. Second thing I noticed: the wall of glass enabling said panoramic view. Now I felt a tightness in the pit of my stomach. 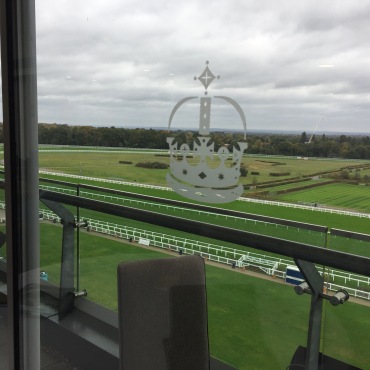 A room with a view… 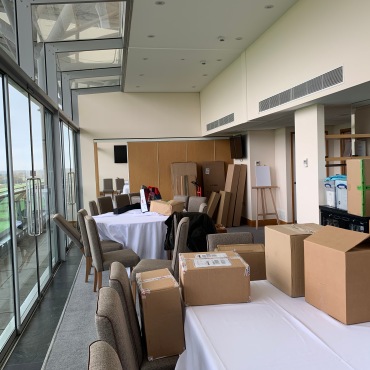 but oh, all that glass!

Question: how do you convince the music-loving world that the sound of analogue tape is by far the best thing they’ll ever hear, when you’re playing it to them in a room with a full-width, full-height wall of glass?!

Of course there was. I negotiated another loan, this time from GIK Acoustics. They solved the problem with 100% effectiveness. The room sounded amazing, and did total justice to the full potential of tape. It also looked incredible, with glass walls and panoramic view remaining fully intact for all to admire. All it took, it turns out, for the perfect combination of sound and vision, were a few discrete, free-standing, acoustic isolation panels, known as Gobos – shown below.

I’m just taking these home with me…

After the show, which was a total blast (you can read more about it here on the blog) there was that whole whirlwind of packing down the venue, returning all the kit to its rightful owners, replying to a million messages and enquiries, trying to catch up on sleep, etc. To make things easier I initially took all the kit back home, to give me time to sort and pack everything properly. I’d moved into my house the year before and was still doing some work on it, including fine-tuning my listening room. Like many British houses the individual rooms are quite small, and so the acoustics were still far from ideal.

“I wonder….” I thought to myself, and figured maybe I’d briefly store the GIK Acoustics panels in my listening room ‘just to see’, until such time as I needed to return them.

…and then the room disappeared

Long story short, the panels are still there. And I have more on order.

I set up a total of eight Gobos (the aforementioned free-standing acoustic isolation panels), two Impression Series Diffusors, and two Alpha Pro Series Diffusors  in the room, and the improvement in sound was nothing short of staggering. There was a whole new level of bass evenness. Before, some notes were missing, while some were ‘doubled up’, bloated and overpowering. Now, and even more so after fine-tuning the panels’ positioning, the bass was not only far more even (which I’d have expected), but also (and this was as real surprise) it had far more weight, power and slam. And we’re not talking subtle change here; this was a night-and-day difference that every single visitor to my home, audiophile or not, heard in an instant. Much bigger than any regular hifi component change!

In addition to the bass improvement, the sound was very much clearer throughout the midrange too. Reflections from the front wall (behind the speakers), from the side walls and from the rear wall (behind the listener) were either being tamed or eliminated. Details became clearer and the sound made more sense; it was far less messy, it was easier to listen to, and the soundstage became palpable. Image depth changed from a perceived two or three feet to many yards. Stages stretched tens of yards beyond the extremities of the listening room. In essence, the room disappeared almost entirely.

There was only one problem: the number and arrangement of acoustic panels required to achieve this sound quality was, quite frankly, completely non-domestic. I had panels behind the sofa against the wall (which were OK, at a push they could possibly pass for abstract expressionist art). I had a panel to one side against the right hand wall (possibly OK again). I had a panel to the other side, on the left in front of the turntable (getting trickier now, because I had to lean around it to cue up a record, or else move the panel each time). I also had panels huddled around the rear and outer faces of the loudspeakers (again, tricky, you had to navigate these ones to walk across the room without bumping into other things). Oh, and my sofa cushions made a makeshift bass trap in a rear corner. And a jumper was hung over the television mounted on the front wall.

So, while sonic bliss was achieved, it came with a certain degree of domestic ridiculousness. So I moved the panels, thinking, oh well you can’t have everything. But then I couldn’t listen to my system! You see, once you finally get what you’ve been longing for, how do you then go back to living without it? (Hence the gamut of love songs on the subject!).

A period of several weeks then followed in which I played, explored and messed around, looking for the best compromise. I ended up moving the left-hand side panels behind the hi-fi system rather than in front of it, and also moved the panels huddled around the loudspeakers away and up onto the front wall behind them. This was certainly better visually, but it didn’t sound as good, in fact was probably only realising 50% of the potential sonic improvement.

That was a compromise too far. I just couldn’t settle for 50% of what I knew, from direct, experience was possible. So then I spent several more weeks moving the panels around, listening, moving, listening. And then I realised I was missing a trick and needed some expert advice, which came in spades from GIK Acoustics’ David Shevyn. David has been unfailingly generous with his time and advice, for which I’m abidingly grateful.

In all our conversations, David has never once tried to ‘sell’ me anything. Then again he doesn’t need to, since I’m the proverbial kid-in-candy-store here. I’ve now ordered some 244 Bass Traps and Monster Bass Traps to mount on my rear wall, in place of the two Gobos currently in that position (I already have a fair bit of abstract expressionist art and it doesn’t pay to overdo it!). The hope is that this will improve the bass performance and further reduce rear wall reflections, as well as freeing up these two Gobo panels, allowing me to further experiment with front and side panel positioning.

So, once we’re at that point I’ll return with an update. Actually there may well be several. Thinking ahead to the next phases of fine-tuning, I reckon I’m going to be looking at…

Front wall fine-tuning. Would thicker absorbers on the front wall allow me to better emulate the effect of the Gobo panels when they were positioned closer to the speakers? Perhaps I can double up with the spare Gobos I’m currently using at the rear, to see what type of panel best works and where.

Side wall reflections. I’m currently using four Gobos (two each side), which I can add to as they’re freed up from other situations. This may or may not require the addition of more units, we’ll see when we get there.

Finally, at some point I’ll investigate whether any further improvement can be had with a diffuser between the speakers (below the TV), or any additional Bass Traps along the ceiling / wall interface.

Well, a guy’s gotta keep himself busy during lockdown… (What’s that you say, I started all this long before lockdown? Okay, I’m busted!).

If you’re inspired to find out more about room acoustics, the GIK Acoustics website is full of useful advice.